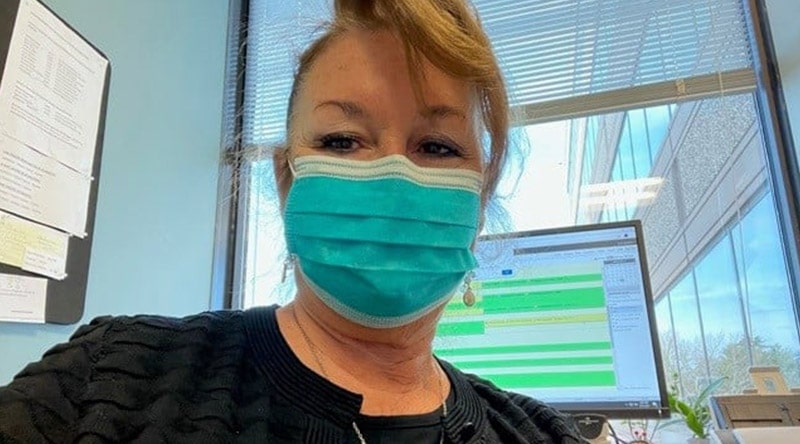 Lori Rumfelt RN has been a part of OHC for 2 years.

Her story is inspiring including having climbed all 67 Four Thousand Foot New England Mountains – an amazing feat!!!!!!!!!
We are very happy Lori joined OHC.

I became an RN when I was forty years old. It was a profession I always looked up to having an aunt that was an RN and always looked so “glamorous “ in her white cap and uniform. Little did I know how much nursing did not have to do with Glamour!

I was an at home mom, happy in the beginning of our marriage but when it looked like things were changing and it was not going to work out, I knew I had to find work and the kind of work that I could make good wages to help support my three children.   I wanted to apply to Nursing school but thought by the time I graduate I’ll be forty years old!  Then I read a letter to “Dear Abby” from a woman struggling with the decision to go to school at an older age. She wrote I’ll be x years old in four years by the time I graduate, and Abby’s response was “How old will you be in four years if you don’t go? “That letter made my decision for me and I started taking my prerequisites at Northern Essex Community College and was getting A’s!  When I applied to the RN program there everyone told me you won’t get in on your first attempt because it is so competitive but low and behold, I did get accepted and was on my way to a different life.

My first job was in a nursing home where I quickly learned this was not in a glamorous position! My first week I was informed I had to pronounce someone deceased! They forgot to tell me that part in orientation.  I worked a couple of hospital jobs doing floor nursing. One at the old Hale Hospital and one at Holy Family on St. Anne’s.

I got into Occupational Health Nursing early on in my career. Holy Family had a Walk in /Family Practice/ Occupational Health clinic that I took a position at and worked there for seven years. I had no idea what “Occ Health” was but gravitated to it getting certified in Audiometry, Spirometry, BAT, Drug testing. We also performed DOT exams and took care of workplace injuries and illnesses. I loved that job and was sorry to see the clinic close.

Next, I was hired at General Electric Aviation where I gained more knowledge about medical surveillance, Worker’s Compensation claims and OSHA regulations. Incidentally I also picked up a new husband while working there. I met him while testing his hearing lol! The contract ended there after five years and I took a two day per week position for FOH (Federal Occupational Health) at the Federal Courthouse in Concord NH. I really like the job but could not survive working only two days per week so then I was hired to work for Premise Health at Raytheon in Andover as the Lead Medical Surveillance RN. I worked there from 2014 until 2019 . Here I met many of “Nancy Clover’s Girls”. They would cover vacations, sick days extra nursing hours etc. They were the best nurses to work with! So knowledgeable and fun to be around.

At the end of 2019 I decided to slow down and began working per diem at Raytheon and also for Occupational Health Connections. Nancy has placed me at 3M, Proctor and Gamble, Pfizer, and most recently Lahey Employee Health where I have been since last November. Nancy is a wonderful boss! Caring, compassionate and generous.

In my spare time I spend time with my family including two adorable grandsons! I have hiked all 67 Four Thousand Foot New England Mountains. I like to read, travel and garden and spend time with my friends many of whom I have met in my nursing career.